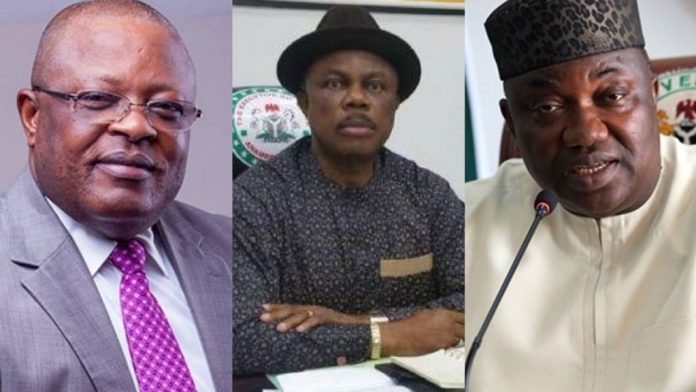 A group, South East Development Initiative (SEDI) has called on the governor of Anambra, Enugu and Ebonyi States, Willie Obiano, Ifeanyi Ugwuanyi, and Dave Umahi respectively to investigate a rural water supply project awarded by the African Development Bank to two firms in their states.

The group in a petition to the governors said it is pained that the water contracts which were awarded in 1991 to be constructed in the three states were abandoned, while the Federal Government was still making deductions for the project till date.

The petition which was signed by the group’s chairman, Joseph Onwe, and two other members, Barr Ikem Onwudiwe and Chief Chukwuemeka Nwodo in Awka, Anambra State, urged the governor to investigate the contract as deductions were still being made from their monthly allocation as a result of the project.

“Both contracts were awarded to Kings Engineering Company and Triax Engineering, both located in New Haven, Enugu, and owned by Prince Arthur Eze. Eighty percent (80%) of the contract sums were to be paid in United States dollars and the remaining twenty percent (20%) in Nigerian naira. There was also a third contract financed by the AfDB which the old Anambra State Government awarded: the building of an Industrial Development Centre (IDC) in Awka, today the capital of new Anambra State.

“You owe the people of Ebonyi, Enugu and Anambra States the duty to explain to them what became of the contracts. After all, huge amounts are subtracted monthly from your state’s entitlements from the Federation Allocation Account to pay for the loans plus interest. And the deductions will go on for 22 ½ years.

“There was an initial moratorium of five years on the loans. It is remarkable enough that your states have been paying for the loans and interest rates straight from the monthly allocations from the federation account without knowing why.”

The group gave the governors 21 days ultimatum to begin a probe of the contract, a failure of which it would have no choice than to involve the Economic and Financial Crimes Commission (EFCC).

“If after twenty-one (21) days you are, however, unable to start a probe into the heist against the people of Ebonyi, Enugu and Anambra States, we will be compelled to report the matter to the Economic and Financial Crimes Commission (EFCC) as well as President, Commander-in-chief, His Excellency, General Muhammadu Buhari, for prompt action. We trust President Buhari and the new EFCC leadership to come to the rescue of our longsuffering people,” the group concluded.