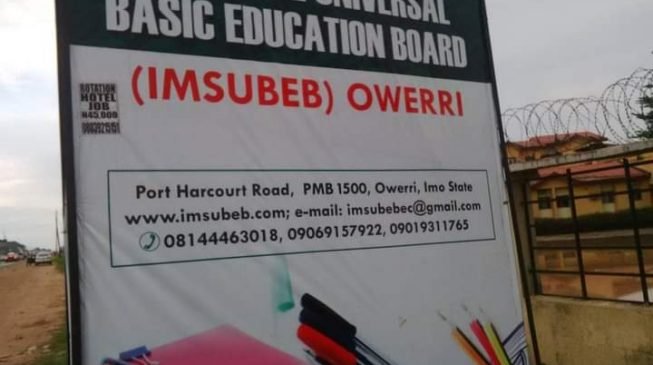 The trouble bedeviling Imo State Universal Basic Education Board, IMSUBEB has opened another frontier in the alleged fraud scandal rocking the state as four persons who were moved to Secondary Education Management Board, SEMB, were alleged to have continued to receive double salaries.

An Audit report has exposed the dark side of Imo State Universal Basic Education Board and few other Government Establishments.

Recently the state government through the management board conducted a special verification to ascertain the true position on fraud allegations. The audit report revealed that over 60 dead people still receive salaries at Imo State Universal Basic Education Board (IMSUBEB) headquarters located along Porthacourt road Owerri.

The report also shows that several persons who are above 65 years of age received salaries from the agency while the staff of the establishment who were upgraded to work at State Universal Basic Education Board (SEMB) still collect double salaries.

The shocking revelations were made over the weekend when the committee set up by the agency of Imo State Government to look into the activities of the establishment submitted its report to Governor Hope Uzodinma.

Receiving the report, the Governor praised members of the committee for living according to expectation. The governor advised other agencies to borrow a leaf from the committee and expose corruption. He declared that the payroll of every ministry and government establishments must be sanitised adding that it is not going to be business as usual.

“No amount of distraction can deter the government from completing the automation exercise. It is unfortunate that agents of the opposition group wants to blackmail the government, unfortunately, we shall not allow them to have their way” Uzodinma said.

It was also reliably gathered that the government made use of another list instead of the authentic worker’s list submitted by the management of IMSUBEB. The Government House has totally sidelined IMSUBEB in the payment of workers’ salaries.

Information revealed that the staff strength of IMSUBEB is 11,478, Tutorial staff is 10,091 while non Tutorial is 1387. This figure was as of May 2020 after all the dead workers had been removed from the list.

One of the senior staff of IMSUBEB who spoke under anonymity to submitted that what is listed in the payroll of IMSUBEB is different from the list that the government is now working with adding that it is the government house that is causing the confusion in the payment list. He maintained that over 60 people are ghost workers in IMSUBEB is unacceptable by the management.

He further hinted that the names of those that retired were also sent to government house. He further expressed that it was painful to hear that some workers of the Secondary Education Management Board, (SEMB) still collect salaries from IMSUBEB.

Meanwhile, those are yet to get their salaries since May are said to have stormed IMSUBEB to demand for their money. On Monday morning, IMSUBEB office was almost shut down by aggrieved workers who said they are yet to be paid by the government.

Most of the aggrieved workers are facing the issue of micro fiancé problem as they are unable to present Bank Verification Numbers (BVN) as directed by government house.
The government has now ordered that those involved should as a matter of urgency change to conventional Banks and get their BVN without delay.

Our reporter observed also that IMSUBEB has made fresh arrangements for the collection and capturing name of those who have changed to commercial Banks as directed by the state government. We learned that after the capturing payment will commence.