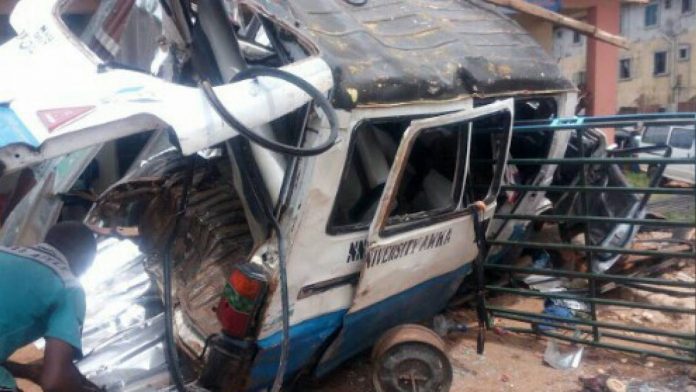 An accident involving a bus and a motorcycle, which occurred along Nanka-Oko Road in Orumba North area of Anambra state, has claimed two lives.

The Sector Commander, Federal Road Safety Corps (FRSC), Mr. Andrew Kumapayi, who confirmed the unfortunate incident to newsmen in Awka on Sunday, said the accident occurred around 8:40 p.m on Saturday.

Kumapayi said that four people, all male, were involved in the accident which was caused by over speeding, but two persons died.

“The bus driver and the rider of the motorcycle had a head-on-collusion due to over speeding as they tried to avoid potholes on the road.

“Unfortunately, the two victims on the motorcycle who were rushed to St. Joseph Hospital, Nanka by some FRSC rescue team were confirmed dead by doctors at the hospital, ” he said.”

He condoled with the families of the dead adding that the incident had been referred to the Nigeria Police Force for further investigation.

” We advise that drivers should always drive within stipulated speed limits, and ensure maximum concentration when driving,” he added.

About 8 buildings including a church, Blessed Holy Trinity Sabbath Mission, in Okporo, Orlu local government area were said to have been allegedly set...
Read more
Features

The National Mass Metering Programme (NMMP), an initiative of the Federal Government of Nigeria has commenced in the South-East. The initiative is designed to ensure...
Read more
- Advertisment -