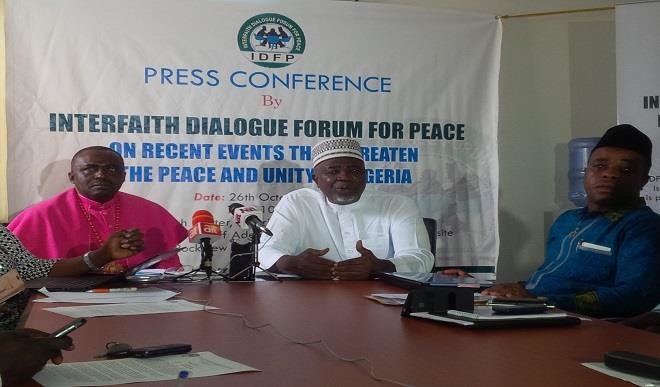 Over 500 Internally Displaced Persons (IDPs) in Ebonyi state have been fed by a religious organisation known as Interfaith Dialogue Forum For Peace (IDFP).

The forum, which is an international NGO, is planning to bring about dialogue between Christians and Muslims in the community.

IDFP called on the federal government to replicate what it is doing in the North-east in  Ebonyi state as the number of IDPs in the state is overwhelming.

Chairman of the Ebonyi state IDFP, Archbishop  Christopher Nweke Ede, said the organisation chose ten pilot states for the distribution of palliatives and  Ebonyi is a beneficiary.

He said: “The forum, which is an international NGO  is bringing about  dialogue between Christians and Muslims to ensure they dwell together  peacefully.”

“This forum came to assist the IDPS, we choose ten pilot states, and Ebonyi state is one of the states.

“The forum is to sensitise the people on coronavirus, share nose mask, senitisers, and give palliatives so that they will not contact the virus.

The vice president of  Islamic Council of Nigeria (ICON) and member of central coordinator, Council of Interstate Forum for Peace (CIFP), sponsored by CASI from Viana, repeated what Archbishop Ede said.

He said: “IDFP is a life touching organisation made up of Muslim leaders and Christian leaders put together by Saudi Arabia, Spain,  and  Italy. They are want to use religion to better the life of the people.”

“We are here today because there is a pilot program called reach the IDPs for COVID-19 sensitisation, demonstration of protective measures and distribution of some personal palliatives. Ebonyi state is one of the ten pilot states and we have chosen two IDP locations here in Nwofe Izzi local government and the second venue will be in Eziulo, Ishielu local government.

Nwofe is the first place of call and the NGO is about two years now,” he said.