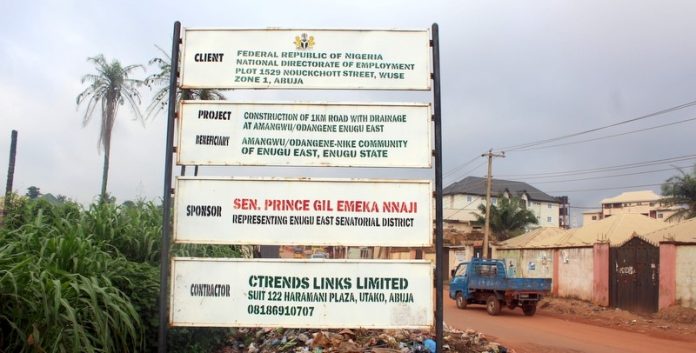 For many indigenes and residents of communities in Nsukka Zone of Enugu State, these are not the best of times.

The people are not happy with the Federal Government, which they say has abandoned many of its projects in the area.

Members of the Igbo Nsukka United Front, a socio-cultural group in the area, are particularly piqued by what they termed the neglect of the area by the Federal Government. The group said, if such projects were completed, they would have given the zone some economic facelift by employing thousands of their unemployed youths.

Director-general of the group, Chinemeze Onyeke, who spoke on behalf of the people, regretted that the area had not been fairly treated by federal authorities: “The zone is the least developed zone in this state. Recently, we went to Ogurugu, a community in Uzo-Uwani LGA, to discover to our surprise that there was an abandoned airport in that community. It was the government of General Murtala Mohammed in 1975 that awarded the project but it was not completed and was abandoned. There is a runway and other airport facilities already built there for the project. The project was awarded to one Franco company. The most surprising finding we made at the airport was the conversion of the aerodrome facility to personal use by a former minister.”

He alleged that the airport had been converted to an aerodrome by the former Minister of Commerce and Industry, Mr. Charles Ugwu.

“It was alleged that he was using it for milling and re-bagging of rice through his company, Tara Agro Company Ltd.

“We also found another abandoned project at a place called Omambra. Our findings revealed that there was a project to build a seaport, which was also abandoned after some work had been done there. We found out that cargo ships were loading and offloading agricultural produce there.

“The seaport was from where colonialists entered northern Igboland and where the entire Igbo nation in this side of the world traded their goods and transported their agricultural produce to the outside world.

“We were also shown the debris of what is left of the commercial bank used by colonialists and Igbo traders at the port for transactions in Ogurugu.

“From the facts we gathered, the proper reconstruction of the sea jetty and the proper dredging of the Omambala/Mabolo River was attracted by Governor Ifeanyi Ugwuanyi when he was the chairman, House of Representatives Committee on Marine and Ports Authority. Today, the project has been abandoned,” Onyeke lamented.

He also decried what he called the marginalisation of the zone in political appointments within and outside the state.

“There is the need for the establishment of good, strong and enduring infrastructure in the zone. This is because the zone has been neglected so much.”

The people are also demanding the establishment of a university in Igbo Nsukka zone.

A letter they addressed to Governor Ugwuanyi, made available to Daily Sun, partly read: We are in the know that the College of Agriculture, Iwollo, which has been upgraded to Enugu State Polytechnic, has not been relocated elsewhere. Our humble request, therefore, is that the pending extant College of Agriculture be upgraded to a University of Agriculture and moved to any area in Igbo Nsukka to complement your effort in making Enugu State the largest exporter of agricultural produce in the South East and also to complement the University of Nigeria.”

He said that the place was acquired by the Federal Government some 45 years ago.

“They acquired it as a balloon, something like an airport for express mail delivery. We had such projects then in two other areas in the country, Ibadan and Kaduna.

The managing director explained that the rice mill was located in the area so that Ogurugu and Adani people, who are known for rice farming, could have easy access to the mill to process their rice.

He said the Enugu State government, which had promised the firm five hectares of land, as well as partnership, has not fulfilled the promise.

Ekenma said that work temporary stopped at the mill due to some logistics issues and high operational costs occasioned by absence of a good access road, poor electricity supply, and insecurity, among other things.

Mr Izimachi Clement said he jointly acquired the airport with Tara Agro Industry. He explained that the land was acquired from the community in 1975 by the Federal Government, under the then military Head of State, General Murtala Muhammad, for the construction of a balloon air station for Nigeria Telecommunications Limited (NITEL).

He further noted that, in 2006, when NITEL was liquidated by the Federal Government, there was a publication in national dailies inviting interested bidders to bid for the airports.

“I made a bid with Tara Agro, and an offer letter was issued to us after we made all the necessary payments to the Federal Government,” he said.