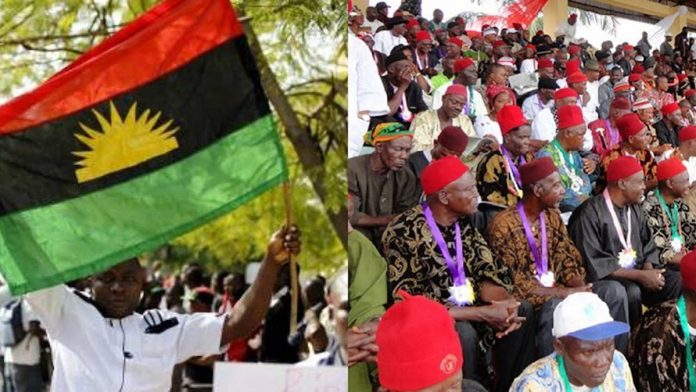 Indigenous People of Biafra (IPOB), yesterda, approached the apex Igbo cultural organisation, Ohanaeze Ndigbo to solicit its assistance to have the group de-proscribed by government.

IPOB leadership delegation, led by one of its principal officers, Benjamin Madubugwu, visited Ohanaeze Ndigbo National Executive Committee (NEC) at its monthly meeting in Enugu and like a repented son made the passionate appeal.

The meeting, according to Madubugwu, was in continuation of the rapport they reached recently with Ohanaeze at the Anambra State reconciliation meeting.

IPOB acknowledged that Nnia Nwodo remained the undisputed leader of Ndigbo and expressed happiness with his fatherly disposition and fight for the Igbo.

Madubugwu, however, said Ndigbo were highly marginalised notwithstanding their contributions to the building of the country and reiterated that IPOB was not a terrorist organisation, but was just being given a bad name to hang it.

He said most of their leader, Nnamdi Kanu’s actions, had been coloured by the information given to him which were sometimes distorted and assured that Kanu was always available for discussions with Nwodo on matters concerning the Igbo.

Nwodo, in his response, welcomed the IPOB leaders and reassured them of his readiness to accept his children back into the fold no matter their earlier recalcitrance.

He recalled efforts he had made to establish an amicable and complimentary relationship with IPOB since assuming office but were frustrated by Kanu.

He made it clear that Ohanaeze Ndigbo had no quarrel with Kanu and that he believed whatever evil machinations of detractors has come to naught with the recent peace accord between the two groups.

He called on Kanu to change his tactics of abuse and belligerence as a step towards building bridges for Ndigbo in the country.