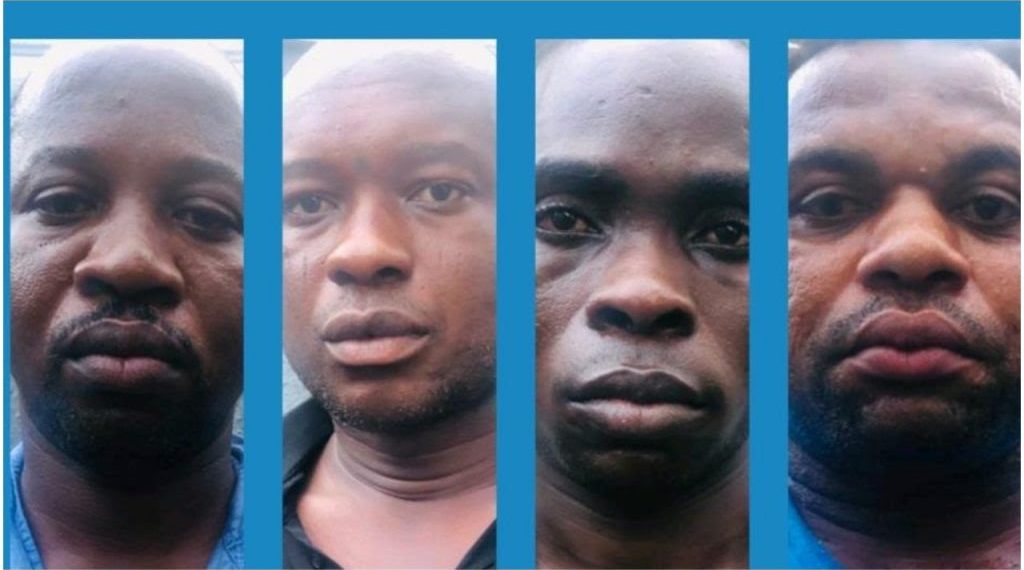 The Police have arrested seven suspects including serving and dismissed Soldiers for the alleged attack on a bullion van that lead to the death of four policemen in Ebonyi State.

The bullion van was attacked on July 29 on its way to Enugu State.

The suspects were arrested by operatives of the Inspector-General of Police Intelligence Response Team (IRT).

A police source said: “Sequel to the attack on a Bullion van in Abakaliki, Ebonyi State on 29th July 2020, by bank robbers which led to the death of four police officers, leaving others injured. During serious Manhunt by IRT Detectives with technical Intelligence support from TIU arrested Alfred Robinson , 45 , Ijaw by tribe in Delta State on August 1 , and recovered arms and ammunition from him.”

The police source continued that during intensive follow, six more gang members were arrested by IRT Detectives within 24 hours .

He gave the names of the gang members as:
Sunday (aka Sunny)03NA/53/088, SGT Ayeni Samuel, 43, a serving Soldier, currently attached to Command Day Secondary School Nigeria Army Cantonment , Ikeja , Lagos;03NA / 53 CPL Emeka Harrison, 33, a dismissed Soldier, who until his dismissal was attached to 7 Division Garrison Maiduguri, Borno State , Emeka Illo, 37, the sponsor of the gang, Abuchi Elijah ( aka Chime ), 27, an informant and Ibaniforio Ekene,38.

“Recovered from the six suspected hoodlums arrested on August 2, who came from the various axis of the south-south / southeast with intent to perfect a planned intended bank robbery in Asaba this week include:- a Lexus 350 SUV, with number plate, AGL 267 FN; containing the following items:136 rounds of K2 ammunition, Five K2 Magazines, 12 locally made bombs, One KPT POWER tOOL 230MM Angle Grinder , two hammers, one cutter, and assorted charms.

” The suspects upon interrogation confessed to the Bullion Van robbery in Ebonyi State where four policemen were killed with many other armed robberies/kidnappings across the Southeast and South-South. The suspects also confessed that four out of the rifles recovered belongs to the policemen they killed during the robbery in. The suspects are assisting the police with information on how to arrest other gang members who are on the run”.

Chisom Chukwuneke, a student who emerged the best 2019 candidate of the West African Senior Secondary Certificate Examination, WASSCE, in her school, has passed...
Read more
Features

Former Governor of Anambra State, Peter Obi, has asked the Judicial Panel of Inquiry (JPI) sitting in Awka, the state capital, to dismiss the...
Read more

Chisom Chukwuneke, a student who emerged the best 2019 candidate of the West African Senior Secondary Certificate Examination, WASSCE, in her school, has passed...
Read more