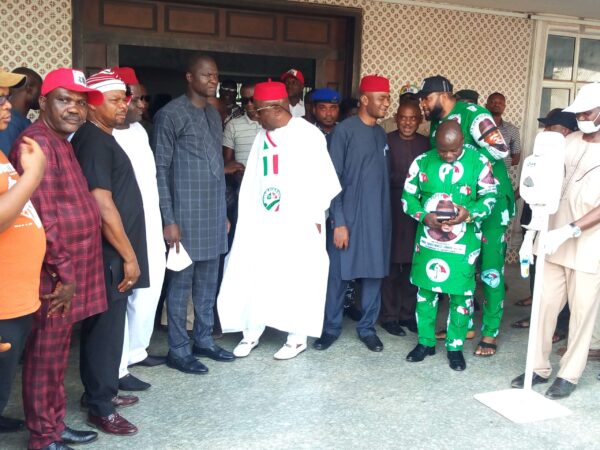 The Eastern Updates gathered that the primaries were conducted as a way of meeting up with the Ebonyi State independent electoral commission’s 10th of August 2020 deadline for submission of names of candidates by various political parties in the state.

The commission slated 29 August, 2020 as date for the conduct of the local government election to hold in the thirteen Local Government Areas of the state.

Recall that the election was earlier scheduled to hold April 25th 2020 but was canceled by the governor, Chief David Umahi as a result of the outbreak of coronavirus pandemic in the country.

Recall also, that PDP had on 14th of March, 2020 conducted their first party primaries which took place in the 13 LGAs, and produced qualified candidates to stand for election in the aforementioned aborted election date.

The Eastern Updates learnt that some of the candidates who were elected to stand for the election then, under PDP, were later dropped by the party on the second primaries on reasons best known to them.

It was gathered that nine out of the new Chairmanship candidates of the PDP are immediate past chairmen of their respective councils, while four LGAs which include Ezza South, Afikpo North, Ivo and Ikwo LGAs respectively are new.

Investigation revealed that three out of the new persons replaced some of the candidates who were legally elected in the previous party primaries of the Peoples Democratic Party in Ebonyi State.