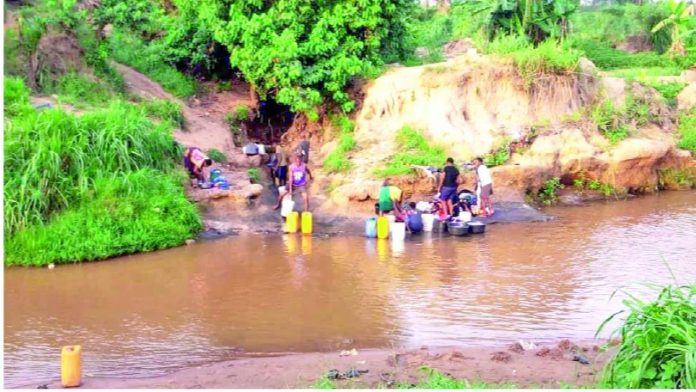 Water, they say, is life. So, no human society can really survive without water. It is, therefore, not hard to understand the frustration of residents of Obollo-Afor, a popular gateway town in Udenu Local Government Area of Enugu State, where water is gold, as they strive to cope with perennial water shortage in the town.

According to some residents who are majorly traders, they have been forced to patronise private water vendors and private boreholes who sell water at cutthroat prices. The only public borehole in the town, Daly Sun, gathered, was abandoned since 2003.

Mrs. Chinasa Odo, a food vendor, said she spends more than N500 daily on water, as the private borehole operators are only interested in maximising profit: “There was a time when water was not much of a problem in Obollo. Then, we used to buy a 30 litres of water at N5 but all that was in the past. We pay up to ₦30 for the same container now.

“We are at the mercy of these people who own boreholes. They decide when to raise or reduce the price. In fact, the price of water has never reduced ever since our main borehole spoilt around 2003.”

“This was not the case some years ago. I will be pleased to hear that the governor will come to our aid. This situation is really terrible.”

Lamenting their plight, Boniface Osogwu, another resident, recalled that some years ago residents fetched water from taps inside their compounds because water was reticulated to homes. He wondered why a massive borehole that he said had the capacity to supply over 10 communities with water should be allowed to rot away.

In an interview, traditional ruler of the community, Igwe Romanus Odo, admitted that the borehole has been not been functional for a long time but hinted that government was making efforts to rehabilitate and put it back to full use to reduce the pains of the people.

He also admitted that water vendors in the town were exploiting the situation to the detriment of residents. According to him, the situation had brought so much financial burden on businesses and individuals in the town: “We all depend on private boreholes who sell at their discretion. If they want to operate, they operate. If they don’t want to operate, they don’t. And if they decide to charge you higher, you cannot run away from it.

“The only government borehole we have has not been functional for a long time. When the late Dr. Ignatius Eze was the chairman of Udenu Local Government Area, he tried to revive the borehole but nothing happened in the end. It only worked for two weeks.

“Right now, there is nothing functional there. In the past, a delegation of Enugu State Rural Water Supply and Sanitation Agency (EN-RUWASA) came here and said that the governor told them to find out what was wrong with the borehole. So, we took them to the place.

“When we got there, we discovered that some of the wires from the generator to other components had been vandalised. All the same, they were able to pick some vital information. After that, they told me that they were coming to revive it but not to its full capacity.”

While the monarch acknowledged other interventions of government in his community, he called on Governor Ifeanyi Ugwuanyi, who hails from the neighbouring community, to help address the water challenge as it would wipe away tears from the eyes of his people.

Not minding the pathetic situation, chairman of the local government, Chief Solomon Onah, said all hope was not lost. He disclosed that the council was really concerned but noted that the project was beyond them and, therefore, appealed to the state government to come to their rescue: “We are asking the state government to assist. If you go to the borehole situated at Umuezejor, you will see that we have cleared the place and the equipment have been assessed.

“It’s not just that borehole because we at the local government are trying to repair other boreholes that are not functional and we are asking the state government to come to our aid because that one in Umuezejor is a very big borehole. So, we are trying to see if it can be resuscitated. If it is done, it can serve the entire Udenu.”