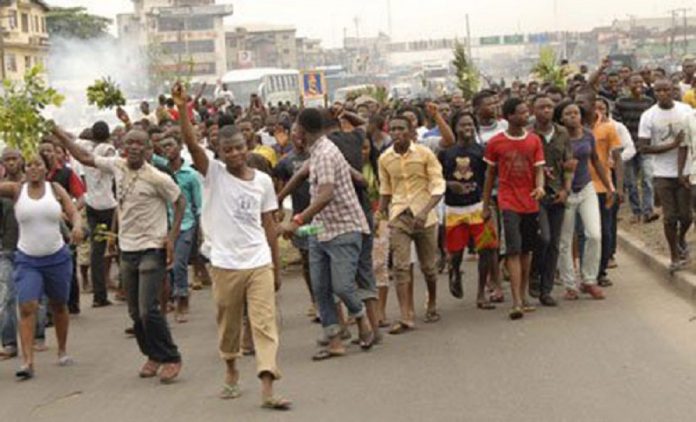 The attention of the Human Rights Defenders (HURIDE), Ebonyi State chapter, Nigeria has been drawn to the crisis rocking Obegueji village in Agbaja community, Izzi LGA of Ebonyi State for more than one year now. So far, one life has been lost, over 30 houses burnt down, livestock and farm produce looted with over 100 persons including women and children forced into exile and still being hunted to be killed.

How it all began
Following an alleged “quit notice” by a PDP stalwart from Agbaja community to members of other political parties in Agbaja community, Peoples Democratic Party, PDP, supporters in Obeagueji village allegedly mounted some roadblocks on the eve of the 2019 governorship election in Ebonyi State and later had a fatal clash with APC supporters during which one Mr Moses Nwamini of PDP ( alleged to be Ebonyi State House of Assembly speaker’s loyalist) was shot dead. Following the death of Mr Nwamini, the PDP supporters in Agbaja blacklisted all APC members in the village and launched a full-scale manhunt on them. Some of them were caught, maimed and dumped in the police; some voluntarily ran to the police for refuge while others fled the village for fear of the unknown. Some of the arrested APC leaders, as HURIDE learnt, are being tried for murder and consequently remanded in Correctional Centres.

Few months later, the PDP supporters allegedly invaded the homes of the blacklisted APC leaders, chased away their wives and children while confiscating and looting all their belongings including yam barns, rice storages, livestock, farmlands, motorcycles, etc. All the

looted food items were shared among PDP members in the community while the rest of the items were auctioned also among the domineering villagers.

A few months again after all the lootings, sharing and auctioning, the PDP supporters again allegedly invaded the individual homes of the blacklisted APC leaders in the village. This time, they razed all the buildings in all the compounds; afterwards allocated the victims’ compounds and farmlands among themselves and promptly cultivated on those the homes and farmlands of these people whose offence was that they belonged to the All Peoples Congress, APC!

The affected APC leaders and their families include: All these women and children have been on a forced exile for over one year now because of the governorship election squabbles of 2019 and the State Government which is the key beneficiary of the crisis has apparently done nothing to save and protect these endangered citizens from possible extermination. Since the police and the court are already taking enough actions towards unravelling the true killers of Mr Moses Nwamini, why are the PDP supporters still taking laws into their hands? Why render these women and children homeless and destroying all their means of livelihood? Their husbands and fathers are already in the custody of law enforcement agencies; why still hunt them to be killed wherever they are sighted for a crime they may know nothing about? What are the sins of these children and their mothers that they have to suffer this long in different refugee camps for more than a year now? Those are the pains of HURIDE. The most annoying part of this is that this tumultuous Agbaja community is the hometown of this cream of notable Izzi personalities? All these stakeholders here including the chairman of Izzi forum, HRH Eze Oketa have been reached by HURIDE in collaboration with HRCRC either on phone call or by physical contact, just in efforts to restore peace in their land. However, there is yet a no clear and definitive conviction that they are readily disposed for peace in that area. Each of them would play to the gallery, pointing accusing fingers towards the speaker of Ebonyi State House of Assembly, Mr. Francis Nwifuru, as the major force fanning the embers of the protracted discord in that part of Izzi land and all efforts to reach him like others were all rebuffed. Therefore, the Human Rights Defenders (HURIDE) in collaboration with HRCRC and other sister organisations in Ebonyi State and beyond is reiterating her avowed determination to leave no stone unturned in ensuring that peace returns in Agbaja community for the sake of the exiled innocent children and their mothers. On this note, the group is passionately urging the Ebonyi State governor, Engr. David Umahi, to kindly wade into this matter as a father of all. He should please prevail on Hon Francis Nwifuru (Speaker, Ebonyi State Legislature, in whose village this fire is raging. Let the governor in all honesty prevail on Nwifuru and watch him step into this matter as an unbiased leader of all. Speaker Nwifuru has all it takes to quell this raging crisis in his hometown to avert further loss of lives because Izzi lives matter.

Finally to the Ebonyi state police Command led by CP Philip Sule Maku, your efforts so far in this direction is eminently commendable. HURIDE is however urging that more be done to completely tame the rampaging youths of the village and to bring to justice all those behind the killing of Mr Moses Nwamini as well as those arsonists who destroyed houses and looted the belongings of others. HURIDE totally condemns the recent attack on the police team on investigation to the boiling Obeagueji village by same village miscreants. Obuegueji villagers cannot be law unto themselves. They must be brought to submit their actions, passions and all to the rule of law. TOGETHER…We Can Restore Peace in Izzi Land, reinstate and protect the exiled men, women and children of Obuegueji village in Agbaja Community of Ebonyi State and advance peace in the entire Ebonyi State.