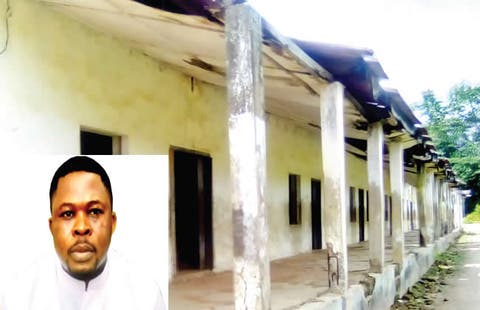 Travelling from Abakaliki on the Ntezi Ohofia-Agba Road to Ezzagu in the Ishielu Local Government Area of Ebonyi State is a nightmare. Ordinarily, it should take one and half hours to get to Ezzagu from the state capital, but it takes more than that to complete the journey due to potholes on the road.

Currently, it takes between two and three hours for one to get to the heart of the Ezzagu-Ezekuna community. The situation is worse in the rainy season as the inhabitants cannot convey their farm produce to the cities and basic goods and services are not being supplied to them from the urban areas.

During a visit to the agrarian community, our correspondent observed that the people’s farm produce was being wasted because there was no market for them in the hinterland. In cities with huge market potential, getting there is a Herculean task because of bad roads. The natives produce garri, palm oil, palm kennel, okro, yam and vegetables, among others.

The Parish Priest of St. Joseph Catholic Church, Ezzagu, Rev. Fr. Malachy Nkannebe, in an interview with The PUNCH, acknowledged that the community was bedevilled with all manners of challenge, saying Ezzagu did not fit into what the 21st Century world represented.

He noted that the area lacked a viable health clinic, market, school and electricity.

Nkannebe stated that he had lost many of his church members, especially women in labour, as a result of the terrible state of the Ntezi-Ohofia-Agba Road from Ezzagu.

He said, “We have serious and various challenges in this community. If you look around this environment, you will agree with me that it’s as if we are still in the 18th Century, because we are behind other communities in Nigeria.

“There is no access road.  There is no functional hospital. There may be buildings out there, but the contents are what I’m talking about. There are no standard schools. Yes, there are dilapidated buildings, but what are the contents? We don’t have a standard market. There is no electricity here.

“There is also no potable water. The source of the water we have here is the Ebonyi River and each time you get to that river, you will want to run away. This is because, inside this river, people wash their clothes and people bathe there. They also fetch same for drinking and cooking.

“I have lost so many of my church members as a result of the challenges here. Many of the church faithful have died because of the absence of social amenities, especially hospital and good roads. Here, you see some people dying of illnesses that could have been treated with the application of simple first aid.

“So, because we don’t have a good or functional hospital around, I have now extended my pastoral ministry into the villages of the community. This is not the primary purpose why I’m here, but as a priest, I can’t fold my hands and watch my members die of illnesses

The priest said he lost a parishioner, Mrs Oruchi Omah, in 2018 during labour, adding that the young woman died in his car on their way to the Alex Ekwueme Federal University Teaching Hospital, Abakaliki, late in the night.

Nkannebe, who also observed that there was no pharmaceutical store in the area, said the only healthcare facility in the area had become a shadow of its former self.

He added, “The first person who died in my car was a woman in labour, Oruchi Omah. That was in 2018. This woman, I was told, was in labour for seven hours until around 11pm when they came to call me. I had to move to the woman’s house and I saw her lying down. With the assistance of people, we carried her inside my car and I drove through the bad road and before we could reach the Alex Ekwueme Federal University Teaching Hospital, Abakaliki, she was already dead. The unborn baby died, too.

“Also, in 2018, I lost another member, a very vibrant young man. This guy was very sick and there was nowhere we could buy drugs for him, because there is no pharmaceutical store around. I took him in my car and by the time we got to Abakaliki, he had passed away.

“The same thing happened to a little child. In her case, we didn’t even get to Abakaliki before the little girl child died. We have had so many cases like that, which happened as result of the challenges here. Others fall sick and it takes many days to get drugs for them from cities like Abakaliki and Enugu.”

The priest appealed to the well-to-do indigenes of the community to rise up to the occasion and do something. He also urged the state governor, David Umahi, to intervene.

A 60-year-old farmer, Mr Titus Ukwuo, who is the Chairman of the Ezzagu Community Development Union, described the situation as pathetic.

“During the rainy season, our people, who live in the cities, don’t come home, because of bad roads. We need roads mostly,” he stated.

Mrs Ukamaka Isaiah, a 57-year-old trader and farmer, said, “There is no functional health centre. I am not talking about a general hospital. Many of our women have die during labour, because there is no hospital to take them to.

“Because of this, they resort to traditional birth attendants, in whose hands many die.”

Another resident of the community, Mr Ignatius Chukwu, said women in the area travel a long distance to access healthcare services, especially during delivery, saying the government would have saved many lives if it established a functional health centre in the community.

“Our women, who want to give birth, travel about 15 kilometres to give birth. And we have had occasions where women in labour died as a result of such long distance travels. This is a terrible situation and our people are suffering as a result.”

A former youth leader of the Ezzagu community, Solomon Ugbala, described the current plight of the people of the area as horrible, saying many youths had taken to drugs as a result.

Ugbala equally lamented the sorry state of natives of the area caused by the absence of basic social amenities.

“For instance, our youths cultivate rice, cassava and other crops, but we hardly have the market for them here, because of bad roads. It is usually an issue convincing a driver to come into this community to convey our farm produce to Abakaliki or Enugu for sale. Bad roads have denied and deprived us of so many good things compared to neighbouring communities,” he stated.

The Traditional Prime Minister of Ezza Ezekuna, (Ogurenya Ezza), Nze Johnpaul Nwali, appreciated the Ebonyi State Government led by Umahi for completing the Agba-Ezzagu Unity Bridge, which was abandoned by the previous administration, but appealed to it to alleviate the sufferings of the people.

“I, however, thank the government of Ebonyi State, but appeal to it to come to our aid by providing our people with basic infrastructural facilities and social amenities,” Nwali stated.

A lecturer at the Ebonyi State University, who hails from the area, Dr Augustus Uhuo, said, “So many pregnant women have died trying to access medical care. Verifiable facts abound; three days ago, a very good friend of mine called me and announced that his wife died during labour while they were taking her to Abakaliki from the community. This one is a very recent one.

“This is just one case out of many and this has been happening. This was a case of child-delivery complications, which came about because of absence of medical experts here.”

A 39-year-old civil servant from the Ezzagu community, Mr Godwin Ezaka, said there was no sign of development in the area.

“Most of our youths have resorted to taking drugs and other dangerous things because they are not busy and cannot also channel their energy to meaningful ventures,” he stated.

A 54-year-old trader, Mrs Rejoice Okah, said she lost her unborn child to bad roads in 2009 during labour, adding that she almost lost her own life to the ugly situation.

Okah said, “I was pregnant and on May 24, 2009, I was in labour. I could not be delivered of the baby from 4pm till 4am the following day. My sister managed to bathe me and after that, my husband took me on his motorcycle to the University of Nigeria Teaching Hospital, Ituku-Ozalla, Enugu State.

“By the time we got there, the child had died in my womb. I was operated on to remove the dead child from my womb. Between that time and November 2010, I suffered a severe VVF problem. This was caused by the bad road. Other women in this community have had similar problems.”

However, efforts to get the reaction of the state government were unsuccessful as the State Commissioner for Information, Mr Uchenna Orji, was not answering his phone calls as the phone rang out.

He did not also replied to text messages sent to his mobile phone as at the time of going to the press.