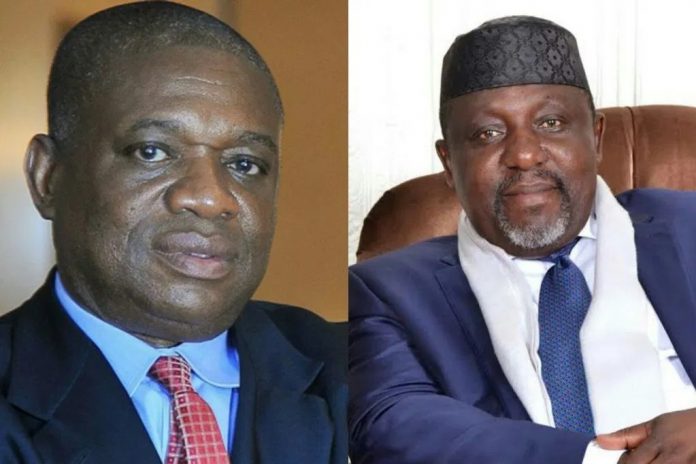 Key leaders of the All Progressive Congress (APC) from the South East on Saturday met in Owerri, the Imo State capital and said the region is now more united than ever to work in the interest of the region and with the federal government.

The APC South East leaders also said that the claim of marginalization of Ndigbo is mere speculation and the figment of imagination of those who are not well informed.
The delegation was led by former President of the Senate, Chief Ken Nnamani and included Minister of Science and Technology, Dr. Ogbonnaya Onu, Minister of Labour and Productivity, Dr. Chris Ngige, Minister of Foreign Affairs, Mr. Geoffrey Onyema, Minister of State, Mines and Steel Development, Dr. Uche Ogah, Minister of State, Education, Dr. Emeka Nwajiuba, and Sir Frank Ibezim.

Those who were not at the meeting were excused.
Addressing the media at the end of their brief close-door meeting, Nnamani who is currently representing the South East in the National Caretaker Committee of APC, said they came on solidarity visit to the Governor of Imo State, Senator Hope Uzodimma, who is currently the only governor the APC has in the South East now.

Nnamani said they did not only come to wish Governor Uzodimma well but to tell him they are impressed with what they saw on ground, “believing strongly that there is a lot of hope in the person Hope as the Governor of Imo State.”

The former President of the Senate enjoined the media to do well to report positively and shun the character of being negative in most cases, reassuring the people of Imo State, South East and APC that currently, “South East is witnessing a new dawn with the high performance of her leaders.”

Corroborating the reason for the visit, Governor Uzodimma added that the APC government in Imo State is the gate-way to integrate Ndigbo into the National political and socio-economic grid as well as the policy frame work of the Federal Republic of Nigeria.

Governor Uzodimma said that the APC Igbo leaders in the South East are properly equipped to direct and guide the Igbo to ensure that whatsoever is due to them from the Federal Republic of Nigeria will get to them.

The Governor said the leaders from the South East are on a wider consultation to ensure that the South East embraces and integrates into what is coming from the Federal Government through proper alignment with its policies and programmes for the greater benefit of the people.

He said: “South East is part of Nigeria, South East leaders exhibit all qualities and capabilities for good governance and as such believe that APC as the ruling party in Nigeria will make the right decision at the appropriate time.”

Speaking on behalf of the South East Ministers who attended the meeting, Dr. Ngige said they are at the Federal Executive Council on effective representation, “getting what is due share for the South East.”

He enumerated projects, both completed and ongoing, which the South East has benefitted from the APC-led government at the centre to include: the credit empowerment Scheme, the N-power project, Home School Feeding programme, East Coast Rail project running from Lagos-Benin-Onitsha-Nnewi to Owerri.

Dr. Ngige also said that South East is equally benefitting from the Sukuk Project which has resulted in the reconstruction of Enugu-Port Harcourt and Enugu-Onitsha express road.

He assured: “As long as we are there, the South East and the Igbos in general will never lose any of their rights.”

Other important persons who were in attendance at the meeting include the Deputy Governor of Imo State, Prof. Placid Njoku, the Chairman of APC Imo State, Chief Marcellenus Nlemigbo and APC apex leader in the South East, Chief Tony Chukwu.