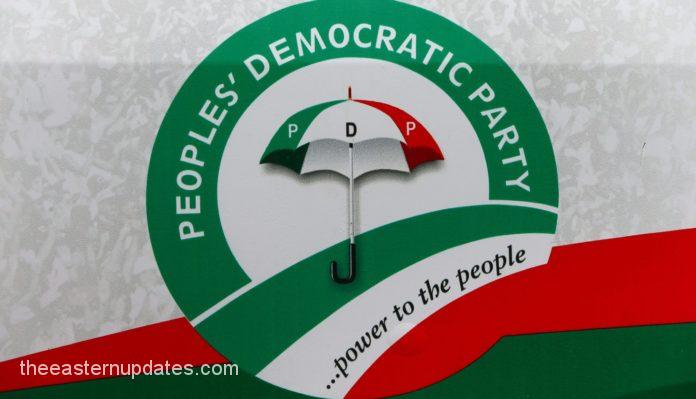 The Abia State chapter of the Peoples Democratic Party (PDP), has renounced a member of the five-man panel sent to conduct the three-man delegate congress in the state, Chief Damian Ozurumba, who claimed that the panel was bribed with ₦5 million to compile the list of delegates without conducting the congress.

The Eastern Updates recalls that Ozurumba had in a viral video claimed that he rejected the bribe and submitted a minority report to the national leadership of the party after the panel had allegedly compiled the list without any election.

There have been a series of allegations and protests by some aggrieved party members that the three-man delegate congress never held in their wards.

Seven out of the nine governorship aspirants of the party had withdrawn from the primaries alleging that the three-man delegate election never held anywhere in the state.

Accusing Ozurumba of working for the enemies of the party, the PDP wondered why it took him so long to make the revelation.

The party flatly denied any involvement in the alleged bribery and urged members of the public to disregard him.

The statement read in part: ‘Another antic of a failed and disgruntled politician in Abia State in the person of one Damian Ozurumba is on full display in the social media. Abians beware!

‘The Party is in notice of a video in circulation where one Damian Ozurumba alleged that he was given N5m alongside other four members of the Abia State PDP Ward Electoral Committee constituted by the PDP National Working Committee, NWC to write the Abia three-man Ad Hoc delegates list.

‘The accusation is beyond infantilism and requires very serious psychiatric examination because of the lack of coordination in the thought process that produced the malicious interview whose sole purpose is nothing but to embarrass the government and the Party. People should ignore such a flagrant display of malicious dishonesty.

‘Why did it take Ozurumba several weeks after the conduct of the exercise to come to the public with this revelation? Technically, his allegations amount to nothing because it has become statute-barred, having exceeded the normal appeal window allowed for such infractions if any.

‘It is very clear that in the days after the primary elections, several vainglorious politicians who lost out have conspired and continue to do so without success though, to embarrass the government and unfortunately they found a willing tool in one of their own; a Damian Ozurumba who probably collected money for the hatchet job.

‘The Party makes bold to say that no such interaction happened between Ozurumba and any other member of the Electoral Committee for that matter; individually or collectively, nor has the National Working Committee, NWC drawn the attention of the State leadership of the Party to any minority report submitted to it as alleged by Damian Ozurumba.

‘We urge the Party faithful to disregard Ozurumba and his likes and trust the ability of the State leadership of the party in the governor, Dr. Okezie Victor Ikpeazu, the State Chairman, Rt. Hon Alwell Asiforo Okere, the State Working Committee, SWC and the enlarged State Executive Committee, SEC to lead them aright.’